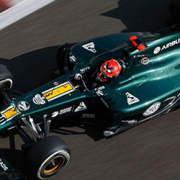 The Drivers line-up has been replaced at Caterham. Pic and Van Der Garde have been replaced by Kamui Kobayashi and Marcus Ericsson.

After spending a year as a GT driver for Ferrari, the former Japanese Sauber team driver re-joins the top series alongside the Tony Fernandez-owned F1 team. He will partner the 23-year-old Swedish driver Marcus Ericsson, who steps up to Grand Prix racing from GP2 and Formula 3.

With today’s announcement, the Formula 1 World Championship drivers line-up is completed. The Championship will start next week by a-three-day collective test session to take place at Jerez circuit.

After exiting from Caterham, Giedo Van Der Garde will join Sauber as a test and reserve driver and will theoretically partner Sergey Sirotkin.

Minardi “The idea of joining the F1 Championship without having a background...