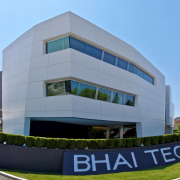 A lot of work was done over the past few days at the Bhai Tech Advanced Vehicle Centre, the new cutting-edge vehicle centre located in Mestrino (not far from Padua) and conceived by the businessman Mr. Ferdinando Bada. The Centre hosted a three-day-event dedicated to all the young promises of the international motorsport.

Seven young drivers, racing in the main national and international championships – Formula ACI CSAI Abarth, Formula 3, GP3 and GT – had the opportunity to test the cutting-edge full motion driving simulator and experience mental and physical training. All the work done was made thanks to the presence of a gym equipped with advanced equipments and motorsport specialists, all supported by the staff of the Forlì based Driver Program Centre.

The centre was established to sustain the professional growth of drivers and teams by technologically contributing to tweak racing cars, as Mr. Roberto Costa, the technical manager, told to Autosprint: “A team which wants to cooperate with us conveys everything about tyres, set-up and downforce. All data are put into the system and, after defining a basic set-up, we start simulating.” Bhai Tech main facility is just the 6-DOF driving simulator, which is equipped with 5 outboard headlamps and an 8m210° curved screen with rear-view images. “In many F1 teams usually a hundred people are involved in this field”, says Mr. Costa, “we’re able to offer clients this kind of advanced technology by only involving few people, so to get costs down and make it affordable for teams”.

The GT driver Nicola De Marco, along with Juan Branger and Santiago Urrutia, two other young drivers running in the Formula Abarth, were invited to test Bhai Tech’s driving simulator. The rookie champion Santiago Urrutia, who was at his first experience at the wheel of a simulator, commented as follows “It was an amazing experience. I had the chance to run 20 laps on the Monza track at the wheel of a GP2 car. Everything was new to me, except the track. The simulator is an absolutely realistic and wonderful vehicle. I think it could be a good substitute for on-track tests”, said the future Open F3 driver. Alessandro Cicognani, the 21-year-old driver who ran in the Carrera Cup Championship last season, thinks the same, too “I think the centre is really fantastic, the simulator is so professional and realistic. It can perfectly simulate reality. When I got off the vehicle I felt like I had run on track. Arms and legs are stimulated just like when you’re racing on track, even though you have to be more concentrated. I think it’s an ideal device for the drivers racing in the GP2 and WSR 3.5 Championships, where you don’t have much time to test the track and private tests are so expensive”, ended up the driver from Ravenna.

His thoughts were also echoed by the Open F3 Champion Niccolò Schirò and the Trident GP3 team racer David Fumanelli “I think the simulator could be a good substitute for on-track tests. I drove a GP2 car for the first time and I got along so well with it, even if I had a little bit of headache, so I didn’t manage to race for too long”, said Schirò “I was astonished by the centre, which is so modern and advanced. It’s equipped with all sort of equipment, just like a F1 Team. The simulator is so developed and it’s even better than the ones used by F1 Teams, because it was built using better materials. Given the fact they’re at their first stages, I have to say that the base is so good. I drove a GP2 car, too, but on Barcelona track”, said Fumanelli “I had never driven this kind of car before and I was amazed by braking. I think it could be so useful to get ready for a GP3 or GP2 racing weekend, since you don’t have much time to test the track. For example, you can train to find the right braking point, besides working on the set-up.”
Nicolò Granzotto, who will be the next Antonelli Motorsport Team driver in the Carrera Cup Championship, was enthusiastic about the simulator, too “The centre is amazing and it’s run by a very professional staff. Nothing is left to chance. The driving simulator is astonishing, as it can perfectly simulate reality. Just after a few laps, everything becomes so automatic, as if you were on track. It’s an essential device and I think it should be tried, as it allows you to work both on car balance and braking points. Along with the engineers support, telemetry can also be analyzed. I want to praise the staff of the Driver Program Center who made us do some physical and mental training before and after the simulator session.”

Gian Carlo Minardi “At Jerez, a first taste of the 2013 racing season”