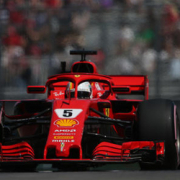 Ferrari gained its third win for the season and regained command of the world championship ladder with Sebastian Vettel who made the best of the whole weekend by setting pole position and the win. Ferrari did not start in the best of fashions but it managed to overturn the situation between Friday and Saturday with a lot of hard work by the German, as well as by his technicians. Kimi Raikonnen disappointed by finishing the race behind both the Mercedes and both the Red Bulls.

Lewis Hamilton was also off his game after having suffered, particularly in qualifying and, subsequently also in the race by finishing only in fifth place. On the other hand the race was positive for Valtteri Bottas’ and Red Bull’s two drivers. Despite running the race in defence, Daniel Riccardo finished in fourth place just behind a strong Verstappen. They will be the deciding factors in a very balanced struggle between Mercedes and Ferrari.

As happened in recent races, Pirelli too did not meet expectations since the mixes did not show the differences in performance that were expected. A number of different strategies were expected but they did not then occur. In two weeks F1 will be back in France at the Paul Ricard Circuit and Pirelli will bring the mixes with the tread reduced by 0.4mm which made their debut in Spain.

Fernando Alonso “celebrated” his 300th grand prix with a retirement, even though he will be able to make a quick come back in a week’s time at the Le Mans 24 Hours. The Spaniard’s future is drawing further away from F1 and could go the way of endurance or Indy races. Le Mans is a very coveted objective for all drivers who boast one or more world championships and for Alonso it would be another good objective, even if this year’s edition is poorer due to the loss of a number of top players. In any case, I wish him the best of luck and I will surely follow him in this new challenge.

We file away a grand prix that was poor in emotions, even if it is a normal enough situation when we witness a technical levelling such as we have this year with Ferrari, Mercedes and Red Bull very close to each other. On the other hand, just behind them there is no lack of competition as today’s ladder shows with Hulkenberg and Sainz’s Renaults, Ocon’s Force India and Leclerc’s Sauber just behind Ferrari’s Finnish driver.

The next appointment will be in France in two weeks.