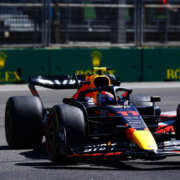 It was a one way grand prix with Max Verstappen decidedly strong. He took the win ahead of Sergio Perez who completed the double for Red Bull strengthening Red Bull’s leadership in both ladders. Now Verstappen’s lead over Leclerc has risen to 34 points with the Ferrari driver also behind Perez.

Two “zeroes” in two races are harmful and worrying. In order to follow its direct rivals Ferrari paid in reliability. The evolutionary step in the engine was not supported by reliability and in a week it will be grand prix time again on a track like Montreal’s that is very demanding for both the engine and the brakes.

In such a packed calendar and tightly fought championship it becomes doubly difficult to recover since the time is lacking to analyze and remedy the problems. After a difficult start at the present time Red Bull is decidedly more reliable. On the performance front Ferrari and Leclerc have shown all the goodness of the project taking an important qualifying session but in the race the forces in the field changed. Unlike Monte Carlo the people on the wall guessed the strategy quickly. Unfortunately this was nullified by the reliability. It was the eighth positive result for George Russell who took third place ahead of Lewis Hamilton and fourth place in the driver’s ladder. Too bad to see the seven times world champion suffer like this and who, amongst other things, complained about back pain due to porpoising. With the races run so closely together it also becomes hard to recover physically.

A positive result for Gasly immediately behind the top teams. It was a good race by Sebastian Vettel who recovered quickly from a mistake in the final stages finishing in sixth position ahead of a decent Alonso. In a year that has not been positive up till now Ricciardo’s finish with his McLaren in eighth place ahead of Lando Norris is to be noted.

F1 | GP MONACO, THE POINT BY GIAN CARLO MINARDI “FERRARI. HOW MANY GIFTS....