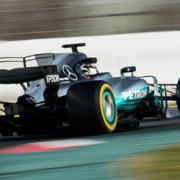 The eight days of tests on the Barcelona track are giving their first results. If on the one side Ferrari and Mercedes saw their efforts rewarded from the point of view of reliability – unlike Renault and especially Honda – an important problem is rising and it must not be underestimated.

Precisely, the data came out of the simulation of the grands prix. From what we have heard from various sources overseas, due to the new performances of the vehicles the 5kg more of fuel (last season’s 100kg of fuel has gone to105kg in 2017) foreseen by FIA’s regulations are not enough to complete a grand prix.

The new regulations have given us decidedly better performing vehicles in both speed and performance in the bends with lap times up to 4” faster. In addition to the increase in fuel the width of the tyres increased as well. This combination makes the power-units even thirstier for fuel.

This information would explain in part why the drivers lifted their feet from the accelerator pedal during their lap sessions. The teams must put the fuel consumption under the magnifying glass.

Melbourne is getting ever closer.

Historic Minardi Day 2017 | Many additions in the second edition of the...

F1 | Gp Australia. It begins, but without Nico Rosberg and Mr. Ecclest...
Scroll to top