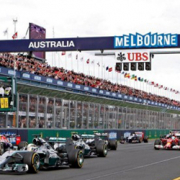 After a very long winter for all the enthusiasts we are at the start of a new Formula One world championship. For the first time in years and due to Nico Rosberg’s sudden retirement  Formula 1 will be without its reigning world champion. Also missing will also be Bernie Ecclestone after forty straight years at the helm of the Circus (as a master puppeteer). The stake at play will be in the hands of its new promoter, Liberty Media. It will be interesting seeing what will be the new guidelines.

We are about to reach Australia for the first grand prix after only eight days of testing on the Barcelona track which certainly rewarded Mercedes and Ferrari in regards to reliability and failed some others (see Honda). Beyond the times registered up till now we will only know after qualifying what the gauge of this season will be as in Spain many played with their cards hidden.

Amongst many uncertainties one thing is certain; the 2017 power-unit consumes much more and this will have the engineers scratching their heads. The 105kg fuel limit imposed by FIA would not be enough to finish the race. This increased fuel consumption also comes from the new Pirelli tyres (much wider than those of 2016) which allow for greater grip and faster speed on the bends. From what we have understood the tyres wear out very slowly. Thus we will see only one pit stop. For this first race the teams will have at their disposition the soft, SuperSoft and Ultrasoft mixes.

There is much curiosity about the season. As a fan I would like to see Ferrari very close to the Mercedes (which for me remains the car to beat) with a good contest between the two. Neither would I underestimate Red Bull.

Let us hope we will see a good grand prix and we will be in touch on Sunday after the race.