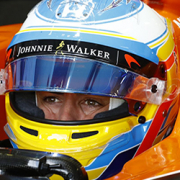 The Abu Dhabi Grand Prix was not only the last act of the 2017 Formula 1 World Championship, it also signalled the end of the partnership (poor in satisfaction) between McLaren and Honda.
In three years of the Anglo-Japanese partnership, which between the end of the 80s and the early years of the 90s let millions of fans dream by winning 4 world titles, 52 pole position, 39 wins and 79 podium finishes which became 600 points, had to settle for only two fifth places (Hungary 2015 and Austin 2016) as the best results, giving us memorable team radio exchanges with Fernando Alonso who never hid his discontent with the Japanese Power-Unit.
From next year a new cycle will begin and Fernando Alonso and Stoffel Vandoome will have the chance for redemption hoping for another step forward by the Renault motors and with Hondo which will supply Toro Rosso.

“Fernando Alonso won two world titles and lost just as many at the last Grands Prix with Ferrari. Someone could say I’m biased, but for me Fernando is always a champion. I had the chance to follow him and analyzing his times and in these three years he suffered with McLaren he did good things despite an inferior car,” commented Gian Carlo Minardi from the lounge of Sky Sport News.
“Today he is still one of the best drivers in the Circus despite his age. Even Hamilton admitted that only Alonso could give him some trouble. It was a big admission by the four times world champion who knows Nando’s qualities very well after having shared the pits with him,” continued the manager from Faenza who was the first to bet on the abilities of the Spanish driver by taking him to his debut in the world championship in 2001.

F1 | Gian Carlo Minardi “I would have made a different choice in Fer...
Scroll to top