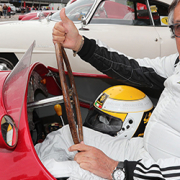 Two months have passed since the Abu Dhabi grand prix and we must wait for another thirty days before seeing the cars on the track in the first day of collective tests. Before that day there will be the presentation of the Renault (February 20th) which will the trail blazer for the path which Ferrari and Mercedes will follow when they lift the covers on Thursday February 22nd. Is the break too long? We asked Gian Carlo Minardi.

“The break is certainly not too long if we consider a season with 21 grands prix. They are all working hard to prepare every single detail also because we must not forget that the most important challenge is tied to the duration of the power-units which this year will be only three per driver. A ratio of 7 to 1,” emphasized Gian Carlo Minardi,

“The sad part is this silence from the teams which are issuing no press releases and have not organized conferences to keep the enthusiasts up to date. Unfortunately this fashion has been taking hold for some time and I find it absurd, just as it is like tripping yourself up by setting the presentations on the same day.

In all the other sporting realities the teams supply the information and the media world goes on,” continued the manager from Faenza,

“The teams are committed to trying to catch up to the Mercedes which is still the point of reference and Ferrari is called upon to make a leap of quality that will not be easy after five wins last year. To be followed is also the fight in the family between Renault, McLaren and Red Bull which all have the same engines and the unknown factor that is Toro Rosso-Honda. The Japanese come from three disappointing seasons and its problems are tied to the use of fuel and the lubricants.”

F1 | Minardi “I am curious about the Williams pair”