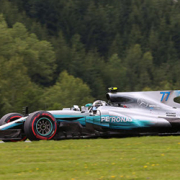 In Austria Mercedes once more gave us proof of its strength and that it is the team to beat. It was the protagonist with two drivers despite the fact that Lewis Hamilton did not manage to make it to the podium, in favour of an excellent Ricciardo. In the final stage Ferrari just missed out of a win with Sebastian Vettel, but it must optimize everything to 101% to try and oppose this Mercedes dominion which every so often shows some “cracks” in its reliability.

It was a grand prix fought on strategies in which the tyres played an important role. From the 50th to the 71st lap the sequence of fastest laps was impressive. Vettel, Ricciardo, Hamilton and Raikonnen lapped with very fast times all within a few thousandths of a second.

From the beginning Bottas made himself the protagonist with a perfect start, determined to stay in the lead and to go through the first curve without damage in which on the other hard Kyvat caused Verstappen and Alonso to pay a high price. It was not an excellent start by Kimi Raikonnen who found himself fighting with Daniel Ricciardo with the Ferrari driver forced to go wide at the first curve and losing some positions.

As was predictable, Red Bull is the gauge for this world championship. It was the fifth straight podium finish this season for Ricciardo. Thanks to his second place “Seb” took his lead over Lewis Hamilton to 20 points. The unfettered Lewis Hamilton tried everything to reach at least the podium despite the blistering of his Pirellis, whereas on the constructors’ front the team from Maranello gave away a few more points. We are not even at the half way point of the world championship and there is plenty of time to recover. In the second part of the season reliability will be decisive, as will be also the penalties for eventual replacement of components of the power unit.

In a week we will be at Silverstone, a circuit that is particularly tough for Ferrari and which last saw Lewis Hamilton’s triumph. On its own turf it will try to make up ground. Ferrari must be careful to take advantage of every opportunity.

F1 | Minardi “Ferrari must think for the future”