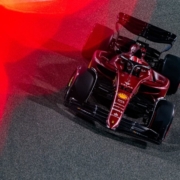 During the test sessions Ferrari won the reliability grand prix and today it confirmed all the good of its plan with an incredible double. When you start with a completely new car being able to count on its reliability is a very positive sign since you can concentrate all the forces on the car. The situation is decidedly different when this is lacking since you must divide your efforts.

What happened to Max Verstappen in the end was a pity because he showed he is a true champion. The scrimmage with Leclerc was as wonderful as it was correct. The driver from Monaco left absolutely nothing to the rivals taking pole position, the fastest lap and the win. It was an excellent result for Italian Motorsport that comes from a few difficult years. Congratulations to everyone in Ferrari. Excellent work by Sainz as well.  As a passionate fan and the President of Imola it is a result that bodes well.

Hoping that this is not the just a “swallow that makes Spring”, the 2022 Formula 1 World Championship started on the right foot giving us wonderful duels on the track with cars that are very different but equally competitive.

On this first weekend we saw a major upheaval of the players on the field with a good leap forward by Haas and Alfa Romeo that even put both its cars in the top 10 with the first point for China’s Zhou. As emerged from the tests, Mercedes confirmed it is in difficulty and currently the championship’s third force, and also lucky. Helped by Red Bull’s double retirement Lewis Hamilton and George Russell took third and fourth place.

Red Bull was certainly missing amongst the top teams, betrayed by reliability problems as the car showed it was already very competitive. Gasly too paid the price as he could have brought an important result for Alpha Tauri. The team can be consoled by Tsunoda’s eight place.

Now we wait to see the second grand prix in Saudi Arabia in a week’s time.

F1 | GP SAUDI ARABIA, THE POINY BY GIAN CARLO MINARDI “WHAT A BATTLE BETWEEN...
Scroll to top