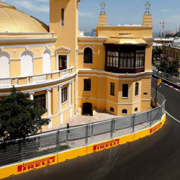 This weekend Formula 1 will be back with the fourth Grand Prix on the Baku street circuit which last year, against all predictions, gave us a race that was full of twists which in fact ignited the rivalry between Lewis Hamilton and Sebastian Vettel who were the protagonists of a contact behind the safety car with the Ferrari driver reacting to the excessive braking by the British driver which caused a collision between the two.

The race was won by Red Bull’s Daniel Ricciardo in front of Valtteri Bottas and Lance Stroll.

Due to the very shape of the circuit it will be a weekend conditioned by the presence of the safety car, even if it does not present any specific technical characteristics for both the aerodynamics and the tyres with Pirelli bringing the Soft, SuperSoft and UltraSoft mixes.

Unlike the expectations at the beginning of the season, we come to this round with Mercedes running on the defensive and without a win, unlike Ferrari which managed to make the most of its opportunities with Vettel’s two wins and Raikonnen’s third place in China where Red Bull was very good at exploiting the mistakes of the others.

In recent days much has been said about Ferrari’s tactics concerning Kimi Raikonnen but we must not forget that the Finn’s contract renewal is dictated by internal conditions and therefore I do not understand this bad mood. The priorities are the team’s objectives and those who work for the team must adapt to the team’s choices. Right or wrong, Sebastian Vettel is the number one driver, just as Lewis Hamilton is Mercedes’ lead driver. Despite the unexciting start to the season by Mercedes and its champion, it will be a very tight fight between the two drivers and I am convinced that the Brit will manage to overturn the situation.

The Historic Minardi Day celebrates the Champions of Motorpsort

9.000 people decree the success of the Historic Minardi Day with special guest...
Scroll to top