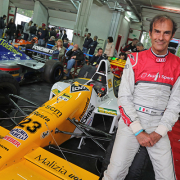 Even the third edition of the Historic Minardi Day celebrates the Champions of Motorsport who will be present during the weekend beginning on Friday afternoon with the challenge between drivers and VIPs at Faenza’s ”Le Cicogne” Golf Club. This challenge will also have as protagonist rally driver Prisca Taruffi who is also a great enthusiast and champion of golf. She will also be at the Imola circuit on the Saturday.

During the long weekend in the pits of the Enzo and Dino Ferrari Circuit we await many important names who contributed to the history of the team founded by Gian Carlo Minardi. People such as Pierluigi Martini who ran more than 100 grands prix with the team from Faenza including its debut race in the Brazil Grand Prix in 1985 with the M1985 and Alessandro Nannini, Alfa Romeo’s lead driver who debuted in F1 with the Minardi Team in 1986 and who also defended the colours in the following year before going to Benetton and winning the Japanese Grand Prix and who only last year spoke of the Minardi Day with these words “I love Gian Carlo Minardi. I raced for him for seven years (editor’s note: betweenF2 and F1) I could not be at the first edition but I have already reserved a place for 2018”. Promise kept!

Gianni Morbidelli will also be there on the Friday and Saturday. He came to Faenza in 1991 to drive the Ferrari powered M191 together with Pierluigi Martini and the year after in the M192 with the V12 Lamborghini engine before continuing his career with Arrows and Sauber. He was also Ferrari’s test driver when he substituted Alain Prost in the 1991 Adelaide Grand Prix,

Ferrari’s historic test driver Luca Badoer will be there on Sunday 6th. He drove for the Minardi Team in the 1995 and 1996 seasons and was already been a protagonist in the second edition. “I experienced fantastic years with Gian Carlo and am tied closely to him and to his team. I owe him a lot. It was a great event that not even rain ruined or stopped. I came as a guest but it would be fantastic to come back in racing overalls and helmet” was Luca’s comment last year.

Coming back to join us will also be Miguel Angel Guerra, Gian Carlo Minardi’s fist driver under contract, Tarso Marques, Luis Perez Sala, Roberto Moreno, Giovanni Lavaggi who will take to the track in his LMP1, as well as racing engineers Gabriele Tredozi (who has been present in all the editions with his PS04B) and Aldo Costa who will drive the Mercedes W04 on Sunday.

Together with the Minardi drivers will also be many of Gian Carlo’s friends who have written many important pages of motorsport history, amongst who are Riccardo Patrese 257 grands prix and 1992 Vice World Champion), Emanuele Pirro who last year saw his dream of driving a Minardi come true “I waited 55 years to drive a Minardi and I finally managed to do so. We are celebrating the story of a man and a team who wrote motorsport history, a story of passion, tenacity and challenging difficulties”, said the winner of five 24 Hours of Le Mans.

Gabriele Tarquini (78 F1 GPs as driver for Alfa Romeo, BMW, Honda, and SEAT with which he was the 2009 WTCC World Champion), Andrea Bartolini (2019 GIA GT and GT1 World Champion with the Maserati MC12), Matteo Bobbi (GT World Champion), Alex Caffi, Carlo Facetti whose wins include the 1980 24 Hours of Le Mans at the wheel of the Lancia Monte Carlo and BMW’s flag bearer Roberto Ravaglia who won with the team from Bavaria the 1987 world championship, two European Championships (1986 and 1988), three Italian Championships (1990, 1991 and 1993), a German Championship (1989) and two 24 Hours at Nürburgring (1989 and 1995) and three 24 Hours at Spa-Francorchamps (1985, 1988 and 1994), ex-F1 driver Siegfried Stohr who will be the protagonist at the Briefing Room on Saturday 5th at 5.00pm when he will present the book “Piloti d’altri tempi” (Drivers of other times) and at 11.00am engineer Mauro Forghieri will present the book “Capire la Formula 1. I segreti della sua evoluzione dagli anni ’60 a oggi” (Understanding Formula 1. The secrets of its evolution from the ‘60s until the present day) which will be followed by a number of other appointments.

On Saturday 5th Mercedes – AMG Petronas Motorsport driver Valtteri Bottas will join us at the Circuit for a round of autographs from 2.00pèm to 3.00pm.

On Sunday 6th ex F1 driver Nick Heidfeld, the protagonist of the Formula E Championship, will take to the track in the Mahindra Racing M4Electro.

Ex Scuderia Everest driver Roberto Farneti will bring the wonderful March-Bmw Schnitzer 732 that belonged to Ernesto “Tito” Brambilla onto the track. There will also be room for karting with the very young Andrea Kimi Antonelli from Bologna.

TICKETS HISTORIC MINARDI DAY
It is possible to purchase tickets for single days or for the whole weekend through TicketOne, or directly at the Circuit. The tickets give access to the paddock and the pits of the Enzo and Dino Ferrari International Circuit and all the events in the programme, as well as to be able to take laps of the track aboard a Supercar driven by professional drivers.

SOCIAL MEDIA & WEBSITE
In order to always keep up to date with the numerous new developments tied to the third edition of the Historic Minardi Day visit our website and the social channels by using the official hashtags #HMD e #HistoricMinardiDay
Here are the addresses:

Super Trofeo | An “Imperial” debut for Karol Basz at Monza