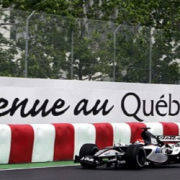 Formula 1 has come to Gilles Villeneuve’s home. Montreal is a circuit which I consider a watershed due to its characteristics If Ferrari manages to come out of the Montreal round undamaged it can begin thinking big.

It as a Ferrari that in the first two appointments showed that it knows how to adapt to changing conditions, even though Mercedes starts with an advantage, We are talking about a track with fast straights and important braking points and where fuel consumption plays an important role. Hamilton and Bottas will be able to count on their two magic buttons. Unlike what happened in Monte Carlo the long legs will not be a problem.

The race will be run on a track that suffers sudden weather changes in which the safety-car has a high level of intervention. The barriers are close and any error can be paid with a heavy price. Last season’s record will be easily broken. In qualifying the drivers could go below the 1’10” barrier. On the tyre front the two top teams have made slightly different choices with 9 ultrasoft sets for Vettel and Raikonnen against the 8 of Hamilton and Bottas.

After a positive weekend in the Principality which finished with Ricciardo on the podium, Red Bull could return just behind Ferrari and Mercedes. The improvement of the chassis is not supported by Renault’s motor (I sometimes have the impression that the French constructor does not supply the same engine to Renault and Red Bull), even though on some circuits they will be the gauge for this year’s championship.

We expect a weekend and grand prix with very different characteristics from those that we have seen up till now.

A good grand prix to all.