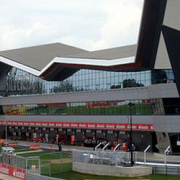 The July tour-de-force continues. We move from Austria to the historic circuit of Silverstone in England and then continue our journey towards Germany and Hungary which will mark the beginning of the August summer holidays.

This is a very technical and demanding circuit, for the tyres as well with lateral forces of 5G. For this reason Pirelli has opted for the Hard, Medium and Soft mixes (with the tread lowered 0.4mm) to try and compensate for the excessive wear. After the race a lot was heard and said about the tyres and I do not understand the need to intervene for change by hiding behind the problem of safety. If the tyres wear too much then you stop and change them.

Silverstone promises to be an important round, above all for those who suffered from problems of reliability at the Red Bull Ring since there was really too little time to intervene.

The weather is still an unknown factor, even if for the time being the forecasts speak of a hot weekend and of the safety car as well. Last year Lewis Hamilton dictated the race in front of his public and this weekend Mercedes is still favoured to win. Ferrari comes to the race reinvigorated after having taken back the leadership of both ladders, even though it was not free of errors with the penalty that hit Vettel for having slowed down Carlos Sainz in qualifying (Q2). The championship confirms that it is characterized and conditioned by errors (drivers and teams) and who will know to make the fewest errors will, in all probability, take home the crown for 2018.

After Sunday’s retirement the British champion will take to the track psyched up and with a strong desire for a comeback. It will be a great struggle to be follow, beginning with the free practice.

Personally, I have wonderful memories tied to this circuit, especially the ’89 edition which ended with fifth and sixth placings for Martini and Sala. It was a decisive weekend for the survival of the team. The phantom of pre-qualifying was just around the corner, as was the loss of the television rights. We were obliged to take home two points. We said goodbye to the eighth round with three points. For us it was like winning the world championship. The M189 proved to be a good and constantly growing car that gave us a lot of satisfaction.

F1 |Gp Austria, THE POINT by Gian Carlo Minardi “It was the weekend of...