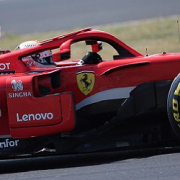 Ferrari that wins so well on a track such as that of Silverstone, which on paper should have been unfavourable, says a lot about the path to the world championship and can only be a good sign in view of the next two rounds in Germany and Hungary.

We saw an absolutely fantastic weekend and race that was run to the sound of battle until the last lap. Ferrari showed that it is decidedly worthy of the situation with excellent work by the drivers, mechanics and the people at the wall. Qualifying was also stupendous with records and a minimal gap (44 thousandths of a second) between two world champions who shared the front row.

Lewis Hamilton will surely be very angry even though he made a great climb back to second place in any case, limiting the damage. I surely do not share his behaviour because a World Champion such as he must respect the rules and must know how to deal with any negative situation even from the media point of view.

Kimi Raikonnen took all the blame for colliding with the British driver even if I do not share this manner of assigning penalties with decisions far removed between one episode and another and too subjective. The Finnish driver made a mistake and he was rightly penalized but in other occasions the penalties were much lighter. Excluding the mistake in the first lap the Finn became a leading player with a solid race that finished in third place ahead of Bottas.

Ferrari leaves Silverstone after having consolidated its leadership in both ladders, with the twenty point advantage over Mercedes in the Constructors’ championship and with Vettel holding scoring an eight point lead over Hamilton.

We prepare for the second part of the tour-de-force in two weeks time with another two grands prix (Germany and Hungary) in successive weeks before the summer break.

The Minardi 191B F1 with Lamborghini engine returns to racing after 26 year...
Scroll to top