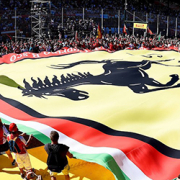 Ferrari’s test of strength at Spa-Francorchamps can be a good omen on a fast track such as that at Monza that this weekend will host the 89th edition of the Italian Grand Prix. We predict another exciting duel between the two pretenders to the throne, Ferrari and Mercedes but especially between Sebastian Vettel and Lewis Hamilton.

As we already saw last weekend in Belgium the weather will play an important role and probably shuffle the cards: with a dry track the Ferrari-Vettel duo has shown it is more competitive than its direct rivals, while under the rain Hamilton and Mercedes have shown they are superior. Storms are forecast for Friday as they are for Saturday as well, even if qualifying should be dry. On the other hand the race should be overcast.

We come to a track characterized by very long straights with only eleven bends where the engines run at full speed for 75% of the lap. It will be a great effort for the power-unit. After what happened at the start last week (the penalty inflicted on Hulkenberg seems correct even if the marshals continue not to use the same yardstick with all the drivers) care must be taken at the first chicane at about 700m from the starting line. They will come to it at speeds much higher than those at Spa.

Ferrari will start the real post Marchionne era and behind the curtains there will be many meetings that could open up a number of moves. Kimi Raikonnen’s future is still to be decided after an unlucky weekend at Spa that was conditioned by the contact at the start of the race that forced his retirement.

We predict that the weekend will not be easy for Red Bull due to the handicap of the Renault engine (Ricciardo will start in last place but will be equipped with the latest version of the PU). The duel between Renault and Haas for fourth place in the constructor’s ladder is to be followed, as well as the chase by Racing Point Force India that in Belgium was the team that achieved the third highest number of points (18) after Ferrari and Mercedes. The entry of the new consortium led by Lawrence Stroll will have given confidence back to the team (as well as new life).