Blog - Latest News
You are here: Home / The Point by Gian Carlo Minardi / F1 | Spa-Francorchamps, Ferrari wins with Vettel. THE POINT by Gian... 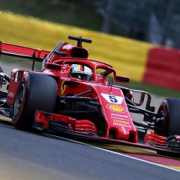 A perfect Ferrari won at Spa-Francorchamps. At this time the car is achieving positive results and has shown that in dry conditions it is superior compared to Mercedes as we saw right from the start when Vettel masterfully overtook Hamilton. The situation is reversed on a wet track when car and driver are inferior to pairing of Hamilton-Mercedes.

It was without a shadow of doubt a great, very tight grand prix run at heart pounding pace on the edge of tenths of seconds, as we saw above all between the 15th and 20th laps between the two pretenders to the throne.

It was a pity about Kimi Raikonnen who was cut off by a contact at the first curve. He too would probably have fought for a place on the podium. The result was a morale boost for all the team and brings a breath of fresh air in view of the last part of the season and the arrival of the Circus at Monza. Vettel nibbled away seven precious points from Hamilton. After the gifts in the previous grands prix (see Germany) he must continuously finish in front of his British rival.

It was an excellent race by Max Verstappen which excited the public and many of his fans came to support him. I would like to see this scenario at Monza as well. All the fans are needed to help Ferrari and Sebastian Vettel in this pursuit. Sadly the lack of an Italian driver on the starting grid is felt but at this time the market has been unleashed and the next few days will be crucial. There are still many unknown factors, above all in the second division teams, where I hope Mercedes will find a place for Ocon after the arrival of the new owner who gave life back to Racing Point Force India. We still need to understand what will happen in Williams to Stroll and McLaren (Vandoorne) and Sauber. In short there are still many pieces to be placed, as well as deciding Raikonnen’s future. Sincerely in Ferrari I would choose a younger line to place to support Vettel. We will wait and see.

Meanwhile I am very happy for Racing Point Force India that began its adventure with fifth and sixth place with Perez and Ocon behind Bottas. On the other hand there was an important mistake by Nico Hulkenberg who set off the pile-up at the start. He came decidedly long into the first chicane (he had two gears more than the other drivers who were ahead of him). Luckily the new safety systems avoided the worst but we must stop and think for a minute that at Monza the first chicane is after a kilometre from the start and they get there at very much higher speeds.

I look forward to seeing many of you at Monza.

F1 | Gp Italy, The heart is ready to beat once more
Scroll to top