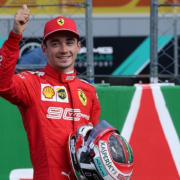 It was a double win for Charles Leclerc who for 53 laps, with great cool-headedness and determination, held off the assaults first by Hamilton and then by Bottas in the final part, leading the two Mercedes drivers to commit come mistakes.

Even in his slips he showed that he knows the rules of the game very well, especially during Lewis Hamilton’s assault during breaking. He was absolutely fantastic from the 32nd to the 42nd laps in which he constantly set his best lap.

We are surely faced with a talent and a World Champion of the near future whose potential was not discovered only in these recent two weeks in which he won two grands prix because his curriculum vitae talks for him. In the lower categories he won everything there was to win. Praise must be given to the FDA which, together with the Federal School, is carrying out a solid programme.

It is undeniable that we are faced with a first driver and they must review their strategies in Ferrari. With this win he overshadowed and put into difficulty Vettel who was the protagonist not of one but of two mistakes that were as serious as they were unexplainable.

Bravo to Antonio Giovinazzi. With a solid race that finished in ninth place and in the points zone, he made up for the mistake he made in Belgium by running the laps with constant results on the clock.

Next stop Singapore which is a track that will be more complicated for Ferrari and could bring a smile back to Red Bull that can look forward with confidence after the solid comeback by Verstappen who started last on the grid and finished in eighth place and the good race by Albon.

F1 | Gp Italy, MINARDI “One swallow does not make a summer, but…”

F1 | Qualification Race, MINARDI “There are other solutions”
Scroll to top