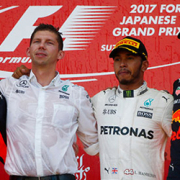 This was another favourable weekend for Mercedes and Lewis Hamilton who is heading towards his fifth world championship. The weekend was unfavourable for Ferrari (that finished behind Red Bull) from which emerged the nervousness of the drivers, as well as from within the team. I certainly cannot share the Team principal’s declarations.

It was a race conditioned by two minor collisions with Verstappen in which both Raikonnen and Vettel suffered some damage but I would not use this as an excuse for justifying a lacklustre performance since in any case Vettel managed to set the grand prix’s the fastest time on the very last lap.

Once again there was no uniformity in penalties since I do not consider the episode between the German and the Dutch drivers as a simple minor race collision. The Ferrari driver was already inside by more than a car’s length and Verstappen could easily have widened out after what happened with Raikonnen (once again not incisive) for which he had already received a 5” penalty (maybe too few as well). More uniformity is needed, regardless of the driver’s name.

Mercedes put away Suzuka with another one-two finish. It again showed that it can manage every situation in the best way possible and to be able to dictate the race. There are four more races until the end and only the mathematics does not allow the team to celebrate yet another triumphant season.

Red Bull lost an opportunity, especially after the very good performance in qualifying that was annulled by a mistake in race strategy. The duel with Sauber for eighth place is still alive, while Haas and Racing Point Force India have made up points respectively on Renault (only one point with Sainz) and McLaren.

The GP’s best driver? Surely Lewis Hamilton who was perfect in every occasion.

GT Italia | Basz the great protagonist at Monza in GT3