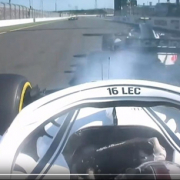 The Japanese Grand Prix has gone into the record books with another Mercedes one-two and fifth and sixth places for Ferrari. In between were the two Red Bulls of Max Verstappen and Daniel Ricciardo.

There was no lack of after effects and twists, like the minor collisions between Verstappen-Raikonnen, Verstappen-Vettel and Magnussen-Leclerc with the Dane who, in trying to avoid being overtaken by the driver from Monte Carlo, moved at the last moment cutting the Sauber driver’s road. “Magnussen can have his license taken away since it is not the first time that he has been the antagonist in these episodes,” was the harsh comment from Gian Carlo Minardi who also accented another argument

“Too many concessions are being made in favour of safety that are detrimental to fairness and this is not good. If we take the examples of the two points of the track where Verstappen collided with the Ferrari drivers, without focussing on who is right or wrong. Until a few years ago the side of the track – that section of asphalt between the two white lines – there was sand which was fatal to anyone who made a mistake,” was the analysis of the manager from Faenza.

“In the first episode Verstappen approached the chicane long but passed through the curb coming back on track and then in the subsequent collision with the Finn, ruining the Raikonnen’s race, when he got a penalty of barely 5”. In the episode with Vettel, the German came out worse when he left the track, however he found asphalt on the escape route thus avoiding the worst.”

“I have the impression that we are hiding behind the factor of safety to allow actions that are not clear and not easily comparable between them that bring the marshals to issue subjective judgments. I believe that when a car exceeds the white line with more than two wheels that the driver must be punished heavily”.

“Otherwise we change the rules and leave the drivers free to fight it out, classifying all collisions as race incidents with no sanctions,” concluded Minardi.

F1 | Russell signs with Williams. Minardi “A positive sign for all young...
Scroll to top