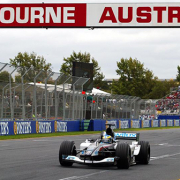 With the Melbourne Grand Prix the long F1 season will begin and it will be characterized by 21 rounds to which, in addition to the strategies tied to the Pirelli mixes (this year the range of colours has grown with the two new compounds), the SuperHard and the HyperSoft) we must add the unknown factor of the kilometres run with the power-units which will have to support a load of seven GPs per unit.

It will be a weekend full of questions which will be able to give us the first answers on the season. With its two drivers Ferrari set the best times at Barcelona by concentrating mainly on the Soft and SuperSoft mixes, unlike Mercedes which ran nearly all of its laps with the Mediums, except for some long runs with the SuperSoft.

The reigning Champions showed that they are extremely competitive from all points of view and it looks like there will be a three way battle with Ferrari and Red Bull, with the latter team very sly in the tests but may have a few more problems of reliability. A battle of nerves has also begun, as can be understood by Lewis Hamilton’s declaration that he wagers on the RB14 as the main rival as it can rely on the strong motivations of its two drivers with Max Verstappen on his third season, while Daniel Ricciardo is at the end of his contract.

It will be interesting to see the attitude of McLaren and Toro Rosso which this winter “swapped” engines. During the free tests TR certainly amazed us by completing a high number of laps, unlike the team from Woking which had some problems of reliability due to which we see few positive signs as was evident from the chassis that had no brands. All eyes will be pointed on the revelation of the last two seasons, Force India. After confirming its fourth place in the world championship it suffered some problems. Last year Ferrari won by taking advantage of some errors by Mercedes in the first races and then they “returned” the favour in the hottest months. In short, we have all the ingredients for experiencing an intense weekend of racing beginning on Friday.

Historic Minardi Day | The third edition is born between confirmations...

F1 | Gp Australia, THE POINT by Gian Carlo Minardi “Weekend under the...
Scroll to top