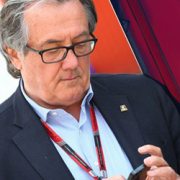 It was an emotional end of the week for Italian colours on the Melbourne track. After Sebastian Vettel’s Ferrari having won a place on the front row and Antonio Giovinazzi’s debut at the wheel of the Sauber (in place of the injured Pascal Weherlein) the German driver won the season’s first grand prix putting the SF70H on the highest step of the podium.

We must not fall into the trap of easy triumphalism but on this part time track the car and driver gave their all. Kimi Raikonnen’s fourth place and fastest lap helped to put Ferrari at top place on the championship ladder. I think that this objective is within the reach of the team from Maranello but it is vital that the Finn finishes in front of his fellow Finn Bottas. He did not look to me like the Raikonnen of the end of last season.

It was an important success for Maranello that will give the right charge to continue working, even though Hamilton showed he still had an advantage in qualifying. The Mercedes suffered particularly the deterioration of the tyres. One could start looking for the reason at the long reach of the car.

It was definitively a positive debut for Giovinazzi. In qualifying he just missed out on the coup of reaching Q2 despite the last minute call and in the race he made himself a protagonist with a solid performance without taking any risks that ended with twelfth place. We must not forget that Sauber also paid a big price from the point of view of the engine as it was powered by last year’s power-unit

In the Red Bull pit, considering Ricciardo’s problems from the first lap only Max Verstappen was in the race bringing in the maximum result. At the present time we cannot express a full judgment on their potential but we are only at the first race after important changes in the regulations.

In two weeks the Circus will be in China and it will be interesting to see if the gap between the first three of the class Ferrari-Mercedes-Red Bull and the rest of the group will be maintained. Both Williams and Force India finished well behind.

F1 | Gp Australia. It begins, but without Nico Rosberg and Mr. Ecclest...

Test, Karol Basz at Imola with Lamborghini
Scroll to top