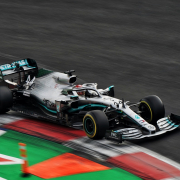 It was the correct order of finishing that rewarded an excellent Lewis Hamilton and a perfect Mercedes that scored its 100th win and confirmed that it is the car to beat. They managed to perfectly exploit all the track conditions led by a great driver.

The result was not so obvious in the long run on Friday. After Saturday’s front row with both red cars Lewis Hamilton won today, even if the party for his sixth world title has been postponed. It was a good performance by Ferrari that was helped by the foolishness and the incredible mistake by Max Verstappen during qualifying.

Despite a pit stop in the first lap and having run the whole race with the hard tyres he also set excellent times up to the finish, finishing in sixth place behind his team mate. The mistake at the start is the result of what happened in qualifying. Today he would surely have been in the struggle for the win together with Hamilton, Vettel, Bottas and Leclerc. The driver from Monaco unfortunately paid the mistake in the pit stop. Those 3.7” seconds were fatal for him in the struggle for the podium. When you do a pit stop more the risks and/or the mistakes grow, just as happened during his second stop.

A great grand prix that was fought with many tactical consequences has been filed away. Four machines within barely 6” after 71 laps represents a nice visiting card for this Formula 1 even if the tyres truly last too long and especially as there is not much difference between one mix and another.

Now we go to Austin where we will be able to see another god fight with Mercedes still the car of reference.