Blog - Latest News
You are here: Home / F1 / F1 | Gp USA, MINARDI “The challenge is open between Mercedes-Ferrari-Red B... 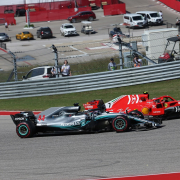 Formula 1 comes to Austin from Mexico City for the third round of the world championship. We are coming from an interesting grand prix that saw four drivers cross the finishing line within 6” with Lewis Hamilton ahead of Sebastian Vettel, team mate Valtteri Bottas and Charles Leclerc who was the unfortunate protagonist of a particularly slow pit stop that cost him the podium.
Max Verstappen was missing from the fight, having paid dearly for his mistake in qualifying. I expect an equally tight duel along the 15.5 km between the three top teams with Mercedes leading the group together with the British champion who is preparing to celebrate his sixth personal world championship title.

It is not enough to have the best car to win but it needs the highest perfection under every aspect. The slightest imperfection is paid for dearly. We are facing an exciting end of season that can only be a good omen for 2020.

After a first part of the season that was not easy Ferrari defended itself, especially with the pole positions and it let us see that it is in the running, even if there was no lack of problems with reliability and some mistakes in strategy. Last year after Lewis Hamilton’s pole it was ex Ferrari driver Raikonnen who brought home the win. The Finn is passing through an uneasy period with Alfa Romeo, even if he was not helped by the team that was the protagonist of too many mistakes, especially concerning Giovinazzi. The eighth position that they currently occupy in the ladder reflects their potential but here in Austin they could come back into the points zone.

This is not an easy time even for Toro Rosso that was overtaken by their direct rivals Racing Point. Gasly saved the weekend in Mexico with an excellent performance bringing the team two points with Kvyat demoted to eleventh place after the penalty for the collision with Hulkenberg in the last lap.

Last weekend the tyres were the protagonists with Verstappen running practically the full race having changed tyres in the first lap after the collision with Bottas. Pirelli will also bring to Austin the hards (c2), mediums (c3) and softs (c4) with only Leclerc (of the top drivers) with 9 red sets, one more than Hamilton, Bottas, Vettel and Verstappen. Four sets of yellows for Bottas and Verstappen and two whites for Hamilton and Vettel.

As we await the the practice session we also await Thursday’s press conference where we will find out the guidelines for the 2021 season.