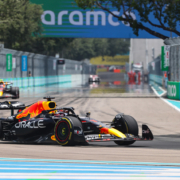 Once again Red Bull showed its superiority over Ferrari in the long run. A Ferrari that in a “one off” lap had placed its cars in first and second place but in the race must fight against a Red Bull that, at the moment, is slightly superior to it. The gap between the two teams is not large but today it was enough to bring home the win despite a fierce Leclerc. Verstappen was formidable.

Bravo Carlos Sainz who completed his task by completing the podium for Ferrari and keeping Perez in fourth place. An excellent result for the constructors’ Word Championship.

Behind Red Bull and Ferrari we saw McLaren again. Maybe they needed a few more weeks to try and resolve their problems. As I expected, they are coming back. We are talking about a top team that knows how to face and resolve complicated situations. Russell, helped by the entry of the Safety car, is showing all his worth by putting Hamilton in difficulty. The “hunger” for success and the desire to emerge is giving him the extra motivation to get the better of the seven times world champion.

On the other hand, the final collision between Vettel and Schumacher favoured Albon. With tenth place he gave Williams another point, proving that he is up to the task entrusted to him.

Luckily they are now coming back to Europe. The Miami track did not give the spectacle that was expected.  It is a questionable circuit. We had only one safety-car while everybody certainly expected something more. Above all on the entertainment front which the Americans are so fond of.