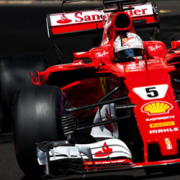 It was a Monte Carlo Grand Prix under the sign of Ferrari. After having won the front row in qualifying they also brought home a fantastic, and just as important, double with a view to the world championship. The result will surely build morale, taking them to the top of the two ladders. It was also a weekend where all the records were broken. It was incredible seeing these young men hurtling around the streets of the principality brushing the guardrails

Vettel was fantastic in all the stages of the race and he deserved full marks. In the first sprint he stayed in his team mate’s slipstream, saving his tyres as much as possible, which then made the difference in the crucial moments with masterful laps before his first pit stop and the restart after the safety car following the accident between Button and Wherlein.

It was a grand prix with few overtaking manoeuvres, as per tradition, in which the strategies had an important role. With Max Verstappen’s pit stop Red Bull committed its umpteenth mistake in strategy which also made Mercedes fall into temptation with Bottas who finished the race off the podium and behind Daniel Ricciardo. By staying on the track as long as possible Vettel and Ricciardo had better luck than their respective team mates.

In light of the world championship it was important for Sebastian to win, not only considering Lewis Hamilton’s seventh place but also due to the possible penalties that could come following the substitution of components of the power-unit between now and the end of the season.

Carlos Sainz was very good with his sixth place for Toro Rosso. The Spaniard confirmed that he is just behind the big drivers, lapping with regular times for the entire race. Perez’s impetuousness was a pity because it spoiled Kyvat’s race. As happened in Spain it was interesting following the race on the timing monitors which were marked with many fastest laps.

In two week we will be in Canada, a track which will be a hard test for the braking systems.

F1 | Gp Monaco, Minardi “Ferrari is favoured due to its shorter legs...