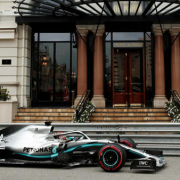 Lewis Hamilton won one of the most exciting Montecarlo grands prix with four drivers within barely 4 seconds. The Mercedes driver confirmed he is a very great champion since, despite his problems with the tyres, he brought home an important win in front of Max Verstappen who never have him a moment of respite. On the other hand, faced with the difficulties with his car Vettel made a number of errors in qualifying and crashed with the FP3.

Verstappen committed a moment of carelessness without which he could have come back in fourth place. Maybe he took away Mercedes’ chance for a sixth consecutive double, even if I saw Bottas under subdued. I thought the 5” second penalty was right.

With the second place Vettel and Ferrari saved a weekend in which they committed unjustifiable mistakes, even if during the race they kept pace with the leaders. What happened on Saturday during qualifying was inexplicable. A team such as Ferrari cannot make such mistakes and, above all, I find it unacceptable that they appealed to the luck of others, especially if these words come from their CEO.

There is no justification ruining a grand prix for your driver that had shown he had an extra gear on the others by giving us two masterly overtakes in the race, as well as a mistake that will surely help him for the future. At that moment Leclerc was unloading all his frustration. In qualifying he had made a serious mistake in assessment which is synonymous with anxiety and nervousness.

F1 | MINARDI “NIKI leaves us as a Champion, as a great test driver, manager...

F1 | GP Canada, MINARDI “The haemorrhage must be stemmed”
Scroll to top