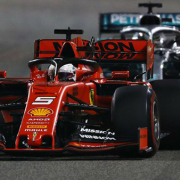 Formula 1 flew overseas and reached Canada on a track which, for its technical characteristics, should favour cars with medium-low down force, such as Ferrari.

Montreal is a very demanding track with long straights and noteworthy braking where the traction has a major role with important changes of direction and many chicanes with the possible entry of the safety-car, the weather and the tyres with Pirelli bringing a solution very similar to that of 2018.

With these characteristics Vettel and Leclerc should suffer less compared to the recent weekends, also because the moment has come to stem this haemorrhage by trying to take points away from Mercedes which will bring the second evolution of its engine.

In the light of the results achieved to date Hamilton and Bottas are still the favourites for the win even here in Montreal. On the power-unit front this will also be an important test for a growing Honda and Red Bull.

The challenge for fifth place just behind McLaren – fourth with 30 points – is heating up with Racing Point, Haas, Toro Rosso, Renault and Alfa Romeo Racing enclosed in a bare four points. In Montecarlo Scuderia TR made a great leap forward by scoring ten points with its drivers Kvyat and Albon and Canada could once again be fertile ground.

F1 | GP Canada, THE POINT by Gian Carlo Minardi “These penalties are...
Scroll to top