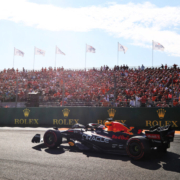 Verstappen deadly. At this moment both him and the car have no weak points and give nothing away to the rivals at all. He was stratospheric for the whole weekend, starting with qualifying with the masterpiece the final part of the grand prix after the safety car came back. Lewis Hamilton could do nothing.

Mercedes made a mistake in strategy precisely with the seven times world champion by not changing the tyres but they managed to nibble away further major at the expense of Ferrari that is now the world championship’s third force.

Leclerc was certainly very good. With third place he achieved the maximum result but he paid practically half a second per lap to his direct rival. He was already out of the DRS zone in the second lap. Another mistake in the pits, this time at Carlos Sainz’s expense who then also ran into the 5” penalty slipping back to the eight place after the end of the grand prix. A major and unforgiveable mistake that cost the Spanish driver 10”.

We will already be back on the track in a week’s time in Monza for the Italian Grand Ptix. The track is favours Red Bull that is working well with little downforce…