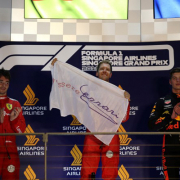 Singapore gave us a weekend characterized by a number of surprises, starting with Leclerc’s pole position, followed by Ferrari’s double with Vettel’s’ first win this season and Mercedes off the podium after finishing in fourth and fifth position behind Verstappen.

This was a weekend that will give morale to both the drivers and to Ferrari that has been resurrected after being in free fall. After the wins in Spa-Francorchamps and Monza that was the moment of truth and the answers were there. All the new developments worked perfectly, reducing the gap with its direct rivals after managing to bring in the best result possible on a track that should not have favourable to them.

It was a win that allowed them to bring home the third straight win and to continue the race for second place in the constructors’ title and also reopened the challenge with Valtteri Bottas for vice-champion. This was a very tight race with three safety cars and ended on the limit of two hours.

We are getting ready for a growing and interesting end of season. Leclerc would surely have wanted to win after Saturday’s fantastic lap but it is right that he is at the team’s disposal. The people on Ferrari’s wall had a great job, even if the strategy was to the German’s advantage. This was an understandable operation in light of the near future.

Congratulations to Antonio Giovinazzi who, after Monza once again was in the points zone, despite the team doing practically everything to damage him. Luckily the three safety cars gave him the chance to partially remedy the strategy. For the first time we saw him also in the lead in the grand prix, helped by the game of strategies.

In a week’s time we will be back on track with the Moscow Grand Prix where last year Mercedes scored a double with Hamilton and Bottas in front of Vettel and Raikonnen. Will Ferrari manage to give its fans another win?

F1 | Qualification Race, MINARDI “There are other solutions”