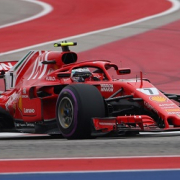 At Austin we witnessed another excellent grand prix, ruined by the latest mistake (the second of the weekend) by Sebastian Vettel. Nine mistakes in eighteen grands prix is an unacceptable average for a driver that wants to win his fifth world championship.

Ferrari’s German driver was certainly the great absentee in a great fight for final victory between three drivers belonging to three different teams that saw Kimi Raikonnen return to success.

The Finn was very good and built this success right from qualifying, without making the slightest error, as has been happening to him for a number of races in this part. Anyway, Ferrari won an important result, placing its cars between the two Mercedes and showing important competitiveness that should make Vettel think even more.

It was a stupendous race by Max Verstappen, a future world champion, who kept at bay the five times world champion who did not hold anything back to try and close the game in Texas with a double cross on Red Bull’s Dutch driver who defended second place superlatively.

In a week’s time we will be back on track in Mexico and there is little time to recharge the batteries, above all for a team (Ferrari) that must again find calm and trust in its lead driver, who is surely not achieving the results expected of him.