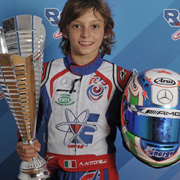 At the South Garda international track Andrea Kimi Antonelli left Mini 60 after having won the Rok Cup International Final that this year celebrated its sixteenth edition.

Placed in the L-Series 2 group, Energy Racing’s very young driver from Bologna followed by Mercedes-AMG in collaboration with Minardi Management was the absolute protagonist with three wins and a fourth place in the three rounds of the Heats that put him in the front row of the Qualifying Heats and he finished the weekend with first place in the Mini Rok Final that earned him the title.

“We thank Mick Panigada and all the staff of Energy Corse for the dedication they put in place all season that helped Andrea to grow. Now another chapter begins,” commented Giovanni Minardi and Alberto Tonti.

For Andrea Kimi Antonelli it is already time to think about next season that will see him make a leap of category to the OKJ that will already begin on the same track at Lonato for the first three rounds of the WSK Final Cup. After the round at South Garda the karting international will move to circuit 7 Laghi of Castelletto di Branduzzo (Pavia) for the round on November 11th which will then be followed the final weekend at the Adria Karting Raceway planned for November 21st.

In the new challenge of OKJ Andrea Kimi Antonelli will wear the colours of the Rosberg Racing Team, the team created by the fusion between the 2016 World F2 Champion Nico Rosberg and Dino Chiesa that, five months after its formation, already celebrated the FIA Karting World Championship at Kristianstad.

“We are excited about starting this new adventure beside Rosberg Racing in OKJ, the newly crowned OK World Champion. This contract strengthens the collaboration with Mercedes-AMG and we will continue to follow Andrea’s growth, giving him the proper support race by race,” continued managers Minardi and Tonti.

F1 | Gp America, PRESENTATION by Minardi “Calm is in Ferrari”