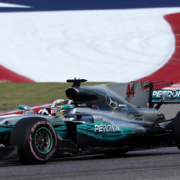 If the conferral of the driver’s title has only been delayed, House Mercedes began celebrating its victory in the Constructors’ title. We give them our warmest congratulations. In Austin Lewis Hamilton once again dominated the race from start to finish. The difference in performance between the two cars is important and we saw it both in qualifying and after a few laps with the overtaking manoeuvre suffered by Vettel who had been the author of a great start.
Following the debacles in the latest races Ferrari found a compromise between performance and reliability. It had most probably sacrificed some of the latest developments, especially those linked to the power-unit, thus conceding another advantage to its rivals. Even though mathematics still gives Sebastian Vettel a chance the world driver’s title can be considered closed. Ferrari must think about 2018 while the German driver has to try and bring home the title of vice-champion at the expense of Bottas who seems to be in difficulty in the final part of the season as the chronometer shows.
The grand prix gave us some tussles and overtaking manoeuvres, as well as the initial novelty of the very American setting. Max Verstappen’s comeback was fantastic and it showed us how much he has grown in Red Bull. It was a pity that a questionable regulation denied him a well deserved place on the podium. It will be important to see how FIA will behave in front of the heavy comments that the young Verstappen directed at the marshals. Unfortunately there is a regulation and as such it must be respected. We see this type of infraction daily in Formula 4 and I believe that the world championship must set the good example.
With the wide track and asphalted runoffs Verstappen was the victim of a modern circuit. Coincidentally this does not happen on the historic tracks since the risk would be to get stuck in the sand. I have long believed that it is wrong to have a different work group for each grand prix since it is difficult to achieve the same measure of judgment when evaluating episodes. This risk is that the judgment will be subjective rather than objective. Just as there is a single race director in the person of Charlie Whiting, it would be correct that his work group always be the same from the beginning of the world championship. It does not seem something so impossible and difficult to apply
Renault’s winning move with the “purchase” of Sainz must also be underlined. He has already brought home important points, and thus halved the gap from his ex team, Toro Rosso which had to settle for a single point, closing the weekend behind Felipe Mass’s Williams which reinforced fifth place in the constructors’ title.
Gian Carlo Minardi

F1 | GP Mexico, Gian Carlo Minardi “Le’s hope will be a weekend without...
Scroll to top