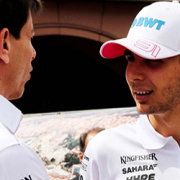 We are at the door of the Singapore Grand Prix, the fifteenth round (of twenty one) of the world championship and a drivers transfer market surrounded by deep uncertainty. It has been some years since we last saw so many changes of teams (see the retirement of Fernando Alonso, Daniel Ricciardo’s passage from Red Bull to Renault or Force India’s change of ownership which saw the cancellation of its points at the Belgian GP) and, above all, there are still pieces that have to find their places.

At this time Ferrari is tipping the scales with the unknown factor tied to Kimi Raikonnen’s future. Despite many rumours, there has been no denial or official announcement from Maranello, even if what happened with the official account from Garage Italia that belongs to Lapo Elkann is striking when it announced the arrival of Charles Leclerc beside Vettel and which then modified the post’s text.

As long as this point has not been clarified it is difficult to see other movements since Ferrari conditions two teams (Haas enjoys greater autonomy compared to Sauber on the drivers’ front). Sadly Esteban Ocon could pay the price of this game of changes, especially since the arrival of Lawrence Stroll as head of the group that saved Force India (renamed Racing Point Force India) with the great probability of bringing his son Lance into the team (freeing a place at Williams).

The one paying the price for this would be the Frenchman. I hope that a skilled manager such as Toto Wolff would not allow such a mess to happen since, in my modest opinion, we are talking about one of the most interesting emerging drivers who deserves to stay in the Circus. It would be absurd if he were not one of the twenty drivers on the starting grid in 2019.

At the present time Ocon occupies tenth place in the drivers’’ ladder with 45 points, one less than Sergio Perez.

Super Trofeo | Pole position and win at Nurburgring for Karol Basz who...
Scroll to top