Blog - Latest News
You are here: Home / F1 / F1 | Robert Kubica in Hungary with Renault for the post grand prix... 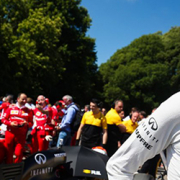 During the post Hungary tests which will begin on Tuesday August 1st Renault will bring Robert Kubica onto the track. The 32 year old Pole will be on his outing with the French team after his terrible accident, but it will be his first experience with a 2017 car and the first occasion in an official test together with all the other drivers.

“The first two tests allowed the team and Robert to gather a lot of information. With the next outing on the Hungarian track at the wheel of the R.S. 17 we will a direct comparison of Robert’s condition” commented Cyril Abiteboul, Renault’s technical director.

“In giving Robert this important occasion Renault is making a very nice action. The Polish driver had all the papers in order to becoming a great driver in this world and with his stubbornness is making himself a talking point once more. There will be many who will fear this comparison, even though he will have to take into account the lack of experience with this new generation of cars. It will be a challenge within a challenge but I am sure he will not disappoint” was the comment from Gian Carlo Minardi who is keen to see the Polish driver in action once more.

“Robert could destabilize the mood of F1 and not only within the Renault team” concluded the manager from Faenza.

F1 | Haas conferms its drivers. Minardi “A defeat for the Ferrari sy...