Blog - Latest News
You are here: Home / HMD / Great success of the fourth edition of the Historic Minardi Day. More than... 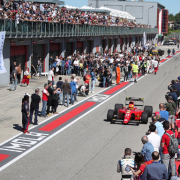 There was a sea of people at the Enzo and Dino Ferrari International Circuit, the stage of the fourth edition of the Historic Minardi Day that over the two days set a new crowd record.

In fact, over the two days more than 15,000 people the fans invaded the Santerno circuit’s pit lane and the pits for a trip over more than half a century of motorsport and Formula 1 history amongst 32 F1 racing cars, cars from F2, F3, Prototypes, Gran Turismo, Pagani and Lancia Martini Racing who also experienced the thrill of a lap aboard a Supercars such as Lamborghini, Alfa Romeo Stelvio and Giulia Quadrifoglio, Alpine and the Dallara Stradale of Andrea Levy, the President of the Parco Valentino Auto Salon scheduled for June 19th to 23rd in Turin.

There were many moments that will remain rooted in the history of the motor show event designed by Gian Carlo Minardi and brought to the track together with Formula Imola. These began with the exhibition of the cars that were protagonists of the F1 World Championship with an exceptional participant: Riccardo Patrese who went back at the wheel of the Renault powered Williams FW-14 with which the champion from Padua won successive grands prix in Mexico and Portugal together with 8 podium finishes, 4 pole positions and two fastest laps that earned him third place in the World Championship.


It was an incredible feeling getting back behind the wheel of the car that gave me incredible results, one of which was the front row of the grid beside Ayrton Senna right here in Imola in the 1991 grand prix. The warmth of the fans was wonderful and I must congratulate Gian Carlo Minardi for having given life to this perfectly successful event with incredible machines. These events are even more beautiful than an F1 grand prix because they give all the fans the chance to come in touch with the cars and drivers, commented a satisfied Riccardo Patrese.

Pierluigi Martini, the driver who was the symbol of the team from Faenza with 109 grands prix raced with Minardi, took to the wheel of the Minardi M189, while Gabriele Tredozi, Minardi’s ex-Technical Director, drove the PS04 Cosworth. Alex Caffi performed with the Ensign N176, the racing car with which he won the 2016 Monaco Grand Prix Historique, twenty five years after retiring from the grands prix.

The Libreria dellAutomobile (Automobile Bookshop) was also successful with the public reaching its second edition with the presentation of extraordinary books by Pino Allievi, Mario Donnini, Paola Rivolta andUmberto Zapelloni, (Giorgio Nada Editore, publisher). After the Saturday that was marked by a splendid spring day, light rain was again seen in Imola this year but it did not dampen the warmth of the protagonists and the fans.

The Easyrain Project raised a lot of interest thanks to its patented anti-aquaplaning that drew the attention of the Motorsport World as already happened in the automotive world.

As per the tradition, the two days in Imola ended with the historic cars that were the protagonists of the Savio Circuit Trophy, the gara di regolarità classica event that was valid for the ACI Storico National Regolarità Trophy and Scuderia Nettuno’s Criterium dell’Appennino.

Gian Carlo Minardi ”A very important and surely positive edition closes and it rewarded us for the work done. We are growing step by step and we will continue working to improve the event. I must congratulate all the fans because it is not easy to find a polite public that respects the spaces and is aware they are walking in the presence of fantastic cars. It was great to see Riccardo Patrese at the wheel of the Williams. He got back into the game with the best times.

Uberto Selvatico Estense (President of Formula Imola): It was a fantastic edition with a great number of fans who invaded the Circuit’s paddock to see real four-wheeled treasures that made wrote the history of motorsport competitions driven by true giants of motorsport. The passion that is gradually consolidating a classic round of the international panorama of motoring events destined for a public of fans leads us to continue investing in this direction beside Gian Carlo Minardi and his team with an eye to the future with the intention of implementing the emotions on offer to those who come to visit our magnificent circuit. Stay tuned.