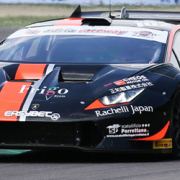 At the Imola circuit Karol Basz made his debut in the Italian GT Championship. At the wheel of the Antonelli Motorsport team’s Lamborghini Huracan Super GT Cup the Polish driver quickly put himself on show with a very stylish debut claiming the pole position with authority and finishing Race-2 in third place after a major comeback together with Japanese co-driver Takashi Kasai and without making any mistakes.

For Karol it was the first outing at the wheel of the powerful supercar from the constructor from Sant’Agata Bolognese and already shows his excellent feeling for the car and with the team from Bologna in view of the next appointments on the calendar.

The final result was compromised in Saturday’s race by a drive through after a jumped start by the driver from Krakow who was in pole, finishing the race in sixth place. A mistake which he quickly redeemed with the podium finish in the second race.

“Pole position and the podium in the first contest with Lamborghini. I am very happy. Without the penalty in race-1 I could even have won the race. Our rhythm for the whole weekend was excellent and this is important. I wish to thank Giovanni Minardi, Alberto Tonti and all the Team Antonelli,” commented an enthusiastic Karol Basz.

“A debut that reflects all Karol’s potential. Pole position and the podium was a great result for the first weekend. It was certainly not unexpected since from the first kilometres he showed an excellent understanding for the Lamborghini and the team. The mistake at the start was a pity, due more than anything else to inexperienced in these races. As he showed in kart, he is not easily beaten,” commented Giovanni Minardi and Alberto Tonti.

GT | Antonio D’Amico asserts himself at Imola and flies to the head of...