Blog - Latest News
You are here: Home / HMD / Historic Minardi Day | Is waiting for you at Imola on Saturday 27... 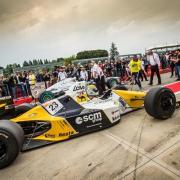 The Historic Minardi Day, the festival created by Gian Caro Minardi and brought on track together with Formula Imola that knew how to rewrite the rules for sporting events by putting fans in the spotlight is coming back.

On Saturday 27 and Sunday 28 April at Imola’s Enzo and Dino Ferrari Circuit the Formula 1 cars that wrote the most important pages of the World Championship will come back onto the track for a journey into the history of International Motorsport together with racing cars from preparatory championships that shaped world champions and with a lot of space for prototypes, Gran Turismo cars and Supercars. In the 2018 edition six Pagani cars warmed the hearts of enthusiasts with a unique parade on the track led by its founder Horacio Pagani, as well as the debut of the Dallara Stradale with a number of hot laps together with the Lamborghinis, Maseratis and Alfa Romeos.

After the success of the previous editions the formula did not change with a single ticket (that can be bought at the circuit’s ticket office or via Ticketone) that will give access to the paddock, the terrace and the pits to see up close the racing cars, the drivers, engineers and the technicians at work on the vehicles as they make them ready to warm up the motors to take to the track. In addition, the ticket will let participants become an essential part of the festival by taking to the track in their own vehicles through Driving Experience (4 sessions on the Saturday and 4 sessions on the Sunday by filling in the form available on the official website), or to take to the track for a lap on board a sports car beside a professional driver and the test themselves on the simulators in the gaming area.

“Last year we managed to cover nearly half a century of sporting competitions through 299 fantastic vehicles from collections around the world, of which 26 from F1, one of which was Pier Luigi Martini’s Tyrrell P34 on its debut together with many Minardis, Ferraris Tecnos, Fondmetals, Dallaras, Fittipaldis, Theodores, Marches and the Cooper T51 only to name a few. There were 110 racing cars from F2 and F3, 2012 GT and GTS cars, 42 vintage cars from the Wheels of history rally and 19 from the Savio Trophy. This year we expect 30 Formula 1 cars with a priceless tribute to Ayrton Senna 25 years after his death and the arrival of some LMP3s,” commented Gian Carlo Minardi who highlighted the strength of the Historic Minardi Day,

“I wanted to bring back to Imola the atmosphere of my first years in F1 with the paddock and the pits open to the fans. All this was lost with the arrival of the computerized passes and today we have an F1 locked up behind the motor homes. We found a polite and passionate public and those who worked on the cars were excited by this formula because they too are overwhelmed by the festive atmosphere,” continued the manager from Faenza.

This year’s edition of the Historic Minardi Day will again be enhanced by the Gara di Regolarità Classica “Savio Trophy” that is valid for the National “ACI Storico” Regolarità National Trophy and the Criterion of the Apennines of the Scuderia Nettuno group. The route will start from Imola’s Enzo and Dino Ferrari Circuit and will wind its way through the province of Ravenna and follow part of the Savio Circuit that saw Enzo Ferrari win the 1923 edition as a driver. The route will pass through the hills of the Romagna and their wonderful towns, with the race concluding inside the Imola circuit.

F1 | MINARDI “The GPs generates unparalled business, but it is not e...