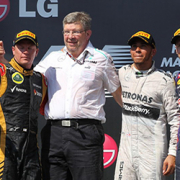 After the Hungarian GP and the first win sealed by the Mercedes’ driver Lewis Hamilton, let’s grade the protagonists.

LEWIS HAMILTON 10 – He drove a perfect qualifying race. He had a perfect tyre management during the race, attacking and defending in the right moments.

KIMI RAIKKONEN 8.5 – Unfortunately his qualifying race was not so good, this is the reason why he doesn’t deserve to get a higher grade. He deserves a high grade for the race he drove, which was excellent. He pitted only twice and had an excellent tyre management. What a pity for the qualifying race.

ROMAIN GROSJEAN 7 – He deserves a high grade, I think he was penalized too much. If he had been another driver, the commissioners would have been more benevolent.

SEBASTIAN VETTEL 7.5 – He was confident to take the pole so he was a little bit nervous during the qualifying race. During the race he attacked Raikkonen in vain, accusing the Finn of being unfair. Considering Webber’s result, he would have given much more.

MARK WEBBER 8.5 – Despite bad luck always picks on him, he drove an excellent race; he recovered and scored important points.

FERNANDO ALONSO 6 – He barely gets a passing grade. To be honest, I didn’t expect him to make those pre and post-race statements. He managed to get a good result in an unlucky week end for Ferrari, but, you win and lose together with your team. He managed to score important points, but he doesn’t get a higher grade because of his statements. Massa doesn’t get a passing grade.

JENSON BUTTON 7 – He was able to manage a not-so-performing McLaren in the best way.

PASTOR MALDONADO 7 – In a very difficult day, he was able to score the first point. At this point of the Championship, it gets more and more difficult to get the points zone, as the five top teams (Red Bull, Mercedes, Lotus, Ferrari and McLaren) don’t want to give away anything. Second-tier teams will have to try to take advantage of each chance available, just like Pastor did, taking advantage of Rosberg’s withdrawal.

Davide Rigon “What a pity!”
Scroll to top