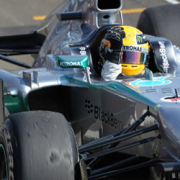 During the Hungarian GP the Mercedes delivered excellent performances and was able to reverse the situation, after taking a very disappointing start of the season. Apart from being so fast in qualifying, they demonstrated to be very performing also in the long run. They could bother Red Bull and Ferrari, but they’re becoming the new pretenders to the success. The next 9 GP will be so taut.

Ferrari ran a very disappointing race. The Italian team also drove a very disappointing qualifying race. If they don’t find a way to recover, they’ll have a very hard end of season. We have several main actors at the moment, so this makes the recovery even more difficult and the result even more uncertain. The forces deployed have changed again, Red Bull still leads the Championship, but now the Austrian team is followed by Mercedes and Lotus. Ferrari is the Championship’s fourth force and Fernando made a mistake when he decided not to take part in the Silverstone tests. The Spaniard will have to talk less. You can’t get results by talking. Lotus is getting ready to bother the Ferrari; the team’ drivers usually bring home important points. If he wasn’t penalized, Grosjean would have fought with Webber. Car upgrades don’t let the team to get the expected good results, so the “Red” is not able to recover at the moment. The situation can be reversed for sure, but they have to work hard and roll their sleeves.

Finally Williams was able to score its first point, as Maldonado finished tenth. It will be more and more difficult to enter the top 10, as top teams won’t give away points. The room left free by Rosberg was occupied by the Venezuelan driver. Force India reduced its advantage over McLaren. At this point of the season, second-tier teams will have to be good at calculating their resources, also with a view to 2014 racing season.

Now we’ll go on holiday, let’s see what will happen at Spa.

Hungarian GP – UP & DOWN
Scroll to top