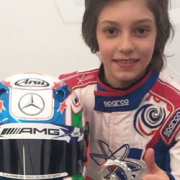 Three weeks after the authoritative win in the WSK Champions Cup with which Andrea Kimi Antonelli ushered in the new season in the colours of the Energy Corse team, the young driver from Bologna won the 23rd edition of the Winter Cup.

Saturday on the Lonato track Andrea Kimi Antonelli confirmed that he is the protagonist of the Mini Rok category by putting up two wins in the Qualifying Heats of Group B and then continued his winning streak on Sunday with success in the Super Heats, crossing the finishing line more than five seconds in front of his nearest rival.

Only in the Final Heats did he let up the pace to Poland’s Piotr Protasiewicz, crossing the finishing line in second place, before masterfully completing the weekend with a win in the Final which gave him the second trophy for the season.

“We are truly happy with Andrea Kimi’s new wins since he showed extraordinary and constant potential for all the weekend, even if it is true that his masterpiece came in the Final. After having slipped to fourth place he did not lose heart and with great determination he climbed back up to get the win. His growth with the Energy Corse team continues with them once more making excellent material available” commented managers Giovanni Minardi and Alberto Tonti.

“It was an excellent weekend in which I enjoyed myself by winning four races and finishing the Final Heats in second place. Unfortunately I did not start the Final well, but as soon as the tyres came up to heat I climbed back up to the head of the race and to the Cup” was the comment from a satisfied Andrea Kimi Antonelli.

Andrea Kimi Antonelli will be once more one of the protagonists on the Lonato track on the weekend of March 1st to 4th for the second round of the WKS Super Master Series.

Kart | Andrea Kimi Antonelli dominated Adria under the rain…but a...