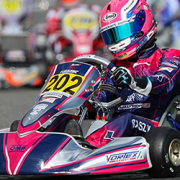 The second race of the WSK Super Masters Series took place at the 7 Laghi International Circuit at Castelletto di Branduzzo. Karol Basz was the protagonist with placings and impressive come backs which showed solid nerves, concentration and coolness even in the most delicate of situations.

In the three qualifying heats Kosmic Racing’s Polish driver won in order a victory, third place and second place thus placing himself well for the final phase. The cold shower came at the end of the third heat when the marshals disqualified the 202 kart because it was underweight, plunging him down to 17th place overall. Placed within Group A of the pre-final the Minardi Management flag bearer recovered four positions to fifth place and completed the job with a fourth place in the Final, the result of another five positions recovered.

In two weeks Karol Basz will be back on track at Muro Leccese for the third round of the WSK Super Masters Series.

“The weekend began really well with a win, third place and second place in qualifying. Sadly the disqualification cancelled the results. In the Final I lost time behind some drivers, but the championship is still long and our material is ok,” commented Karol Basz.

“Even if he missed out on the podium, we must absolutely compliment Karol. On a very technical and tight circuit like Castelletto he kept his nerves without making the slightest error and made himself the protagonist with important come backs in both the pre-final and the Final. We still have things we must get right in performance, but we are on the right road to get back on the podium beginning at Muro Leccese,” said manager Alberto Tonti.

The curtain falls on the Barcelona tests. Minardi “Too early to judge. We...

Historic Minardi Day 2017 | Many additions in the second edition of the...
Scroll to top