Blog - Latest News
You are here: Home / F1 / The curtain falls on the Barcelona tests. Minardi “Too early to judge. W... 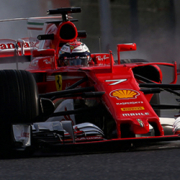 The sun has set on the last day of tests at Barcelona. The first session ended with the best time by Kimi Raikonnen in his Ferrari SF70H. The day was marked with a deliberately wet track to evaluate the behaviour of Pirelli’s wet and intermediate tyres. The slicks were then tested in the afternoon

It was a difficult day to judge as the track dried quickly, effectively thwarting the development and grip of the track, as well as having lowered the temperature of the asphalt and affecting that results of the rivers who took to the track on ultra soft, super soft and soft mixes.

Too early to judge the forces at play

At the present time it is too early to judge the forces at play even though there are only four days available before the departure for Melbourne. The cars will be back on track beginning Tuesday. Thanks to Pirelli’s colours we know the types of mixes, but we are missing one vital detail; the amount of fuel aboard each car.

For now the only detail we can use is reliability. The numerous laps run by Sebastian Vettel and Kimi Raikonnen as a good calling card for the SF70H and also for Hamilton and Bottas’ W080. In the final minutes of yesterday’s session Seb had a problem with his Ferrari, whereas in the morning it was Hamilton’s turn to remain the in the box for an electrical problem for his Mercedes. Renault and particularly Honda fought with a few too many problems. The French, according to the Red Bull drivers, have yet to push their power-units to their limits.

Pirelli ready to change the mixes

Despite the thumbs up from the drivers Paul Hembery, Pirelli Motorsport’s Director, announced that the mixes of the wets will be changed, especially the intermediates, as they had suffered significant deterioration. The decision came at the end of the final session on the artificially wet track at Barcelona. It is thought that two types of wets will be available according to the situation: one for the warmer tracks and one for those such as Silverstone and Spa which are always colder.

F1 | An important step for the fans by Liberty Media