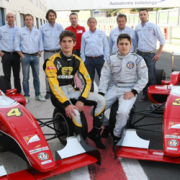 The “Young drivers project”, promoted by the ACI CSAI in cooperation with the Ferrari Driver Academy, has started again on the Italian track of Vallelunga. The project aims at supporting the professional development of young talented drivers.

After last season’s positive experience, during which some selected drivers had the opportunity to make test sessions during Formula ACI CSAI Abarth racing weekends, the programme conceived by the Federation School and the FDA still goes ahead “In the past season we were able to put into practice what I’d like to see again in F.1 on Fridays. In fact, according to the project, some young drivers selected by the Federation School and the FDA have the opportunity to make tests alongside the Italian Formula ACI CSAI Abarth Championship’ official drivers. Through that young drivers not only have the opportunity to keep themselves in training at the wheel of a single-seater, but they also get a better knowledge of the circuits they will race at and draw attention on themselves. It was just during test sessions that a driver like Antonio Fuoco drew attention on himself. The young driver is now a FDA programme’s member and also the F.R. Alps great protagonist”, says Gian Carlo Minardi, the ACI CSAI Federation School’s Supervisor and Ferrari co-operator “Through these tests we’re aiming at giving young drivers the opportunity to draw attention on themselves, keeping themselves in training despite the lack of financial resources.”

This year the programme’s format has been modified and it consists of two training sessions, one of that has already taken place at the circuit of Campagnano, near Rome and the second will take place at Fiorano in mid- September “It’s a very ambitious project, it gives us the possibility to evaluate young drivers by seeing their improvements and professional development, mental and technical growth step by step. Despite the lack of financial resources we want to do a great job in order to make our Italian drivers more and more appealing to the world of motorsport. It’s just to reach this goal that, along with Mr. Raffaele Giammaria, the Director of the Speed and Rally Division of the Federation School, and Mr. Luca Baldisserri, who is in charge of the FDA project, we’re in the process of planning new formats to evaluate young drivers better and better”, says also the manager from Faenza “Along with the ACI CSAI top brass, we’re also in search for sponsor to support the programme’s second stage, as in Italy we’re not lacking talented drivers, what we’re lacking for is just the gasoline to make them run”, points out Minardi.

Francesco Iacovacci, Alessio Piccini, Gabriele Volpato and Christopher Zani, the four drivers who were selected by the Federation after showing their skills throughout their motorsport experience – racing go-karts and driving race cars – , had already made some test sessions at Vallelunga, driving a Formula ACI CSAI Abarth race car for the first stage of the programme “Iacovacci and Zani had already attended the Supercorso last year and they had already experienced the evaluation test. They underwent a psychophysical test again. They’re our go-kart drivers and, although they’re skilled enough to race in Formula car Championships, they’re lacking financial coverage. It’s an interesting experience also for Piccini and Volpato. The 17-year-old driver form Torino has already driven covered-wheel race cars, as he took part in the Italian Championship dedicated to alternative energies, at the wheel of a gas-powered KIA last year. This year he has also taken part in the Euro Nascar Championship. The 15-year-old driver form Montelupo Fiorentino Piccini comes from karting. It was his first experience at the wheel of a Formula car and he was selected by our observers who attend every race of the Italian kart Championship. Doing that, we can monitor young drivers’ improvements. All data enrich our know-how”, ends Minardi “We’re working to move forward the Supercorso project, to be scheduled for the first week of November. We’ll bring to Vallelunga those drivers who are considered to be well prepared to move a step forward.”

After Indianapolis….a little bit of the Minardi Team even at Le Mans