Blog - Latest News
You are here: Home / F1 / Post-race Melbourne. Too much criticism. Let’s put some things in orde... 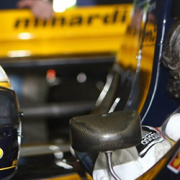 The first race of the season has been filed away with the win by Mercedes with Valtteri Bottas in front of Lewis Hamilton and Max Verstappen’s Red Bull Honda. And Ferrari? Sebastian Vettel crossed the finish line in fourth place with a gap of nearly a minute, in front of Charles Leclerc.

The result surely was less than expected, especially after the winter tests in Barcelona.

“The winter tests did not prove to be true and I hope that, from what we saw in Melbourne, it is not the reality,” analyzed Gian Carlo Minardi, “We are only at the first race of the season made up of 21 rounds and we do not see the day from the dawn. We have to consider that Albert Park is an abnormal track with many bumps that alter the geometry of the suspensions. Furthermore, the race was conditioned by the tyres that did not answer as expected with the surprise of the Hards. In Bahrain we will have truer results and it will be a more realistic gauge, also because, considering the expected temperatures, it could highlight some problems,” continued the manager from Faenza.

“I am still convinced that the main difference between Mercedes and Ferrari is in the power unit and the best management of the power must be found by one team rather than the other. Sunday’s debacle must surely make them think”.

The post race period left a trail of criticism, both Ferrari, guilty of also finishing behind the Red Bull, as well as having paid too big a gap to be true and also of Daniel Ricciardo from Abiteboul.

“It makes me smile and I find it hard to believe some criticism, after only gp, directed at a driver who in recent years achieved more than respectable results, above all if these come from one of the people most criticized for Renault’s lack of results. Renault should think about the criticism about the motor, especially compared with the excellent result obtained by the direct rivals of Honda that, with Red Bull, celebrated the first podium of the hybrid era. I have the impression that certain statements are expressed to divert attention from more important problems.

“We need to recognize that the Japanese made a great step forward and the result gives morale and solidity to the work carried out both by Honda and Red Bull”.

The first two points for Lance Stroll with Racing Point, ninth behind Kimi Raikonnen and in front of the Toro Rosso’s Kvyat on his comeback. “He was very good and, unlike Perez, made no mistakes It was not easy for him putting aside the label of the paying driver, but I am convinced that he has his papers in order to stay in F1. Last year he was in a team, Williams, which had a number of problems that sadly have grown exponentially this year. I saw him in action in the lower formulas where he won. When you win it means you have the right characteristics. But becoming world champion is another story,” concluded Minardi.

GP Australia | THE POINT by MINARDI “The difference Mercedes-Ferrari...