Blog - Latest News
You are here: Home / The Point by Gian Carlo Minardi / GP Australia | THE POINT by MINARDI “The difference Mercedes-Ferrari d... 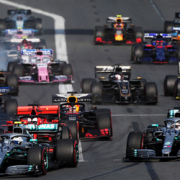 In order to analyze the Melbourne grand prix we need to take a step back to Q1 in qualifying where we had 16 drivers within 1” – that confirms the closing up towards the top ranks in the performance of the teams in which a small mistake is enough to be cut out – the difference from top to bottom of the group grew to a second and a half in Q2 up to 2” in Q3 with a gap of 7 tenths of a second between Hamilton’s Mercedes and Vettel’s Ferrari.

In my opinion the advantage is to be found mainly in the engine and the capacity to manage the power as Bottas showed in the record lap (1’25”580) in the second last lap in which he managed to increase his race pace by 1” with great ease taking away Vettel’s fastest lap (1ì26”2). Ferrari stopped at 1’26’9 with Leclerc.

We witnessed a very tight race that was won by Valtteri Bottas who was the lead actor with his best race. The Finn was unbeatable, especially in the middle part in which he set the fastest lap six times between the 31st and 42nd laps with a race pace clearly superior to the competition between 1’26”7 and 1’27”2.

Ferrari will need to analyze this negative result that was dictated not so much with the fourth and fifth places of Vettel and Leclerc but especially by the considerable gap inflicted during the race, Sebastian and Charles crossed the finishing line with a delay of 57” and 58” from Bottas. This is an enormity if we think of the results of the Barcelona tests. Vettel complained a lot about the tyres and I am honestly amazed by the choice of the teams to bring only one set of Hard tyres which showed that they were the best mix for the race as we saw with the Ferrari number 16 during its comeback.

This was an excellent result for Verstappen with the Red Bull Honda who took a very important podium finish (the first for the Japanese since its return to F1). The Dutchman set a rhythm, especially in the final part that Ferrari found hard to match. A round of applause also for Kvyat who celebrated his return to the world championship with tenth place in front of Gasly’s Red Bull and to Kimi Raikonnen with an excellent eighth place with Alfa Romeo Racing. Antonio Giovinazzi paid the price for an imperfect qualifying when he missed the cut for Q3, as well as a less than excellent race strategy by the team. With a parity of tyres however his rhythm was not far from that of Kimi.

Road To Australia | MINARDI “In Melbourne in memory of Charlie”

Post-race Melbourne. Too much criticism. Let’s put some things in order
Scroll to top