Blog - Latest News
You are here: Home / Championships / Rigon on the way to Spa to take part in the 24H race 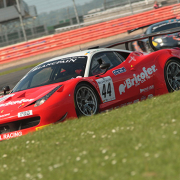 Turned off the F138’s V8 engine, Davide Rigon is ready to take part in the Spa 24H, the Blancpain Endurance Series’ fourth round, at the wheel of a Maranello car, this week end.

The Ardenne-based track will host the International GT competition’s most important race and the talented Italian driver and his teammates Zampieri and Ramos will take part in the competition at the wheel of the Ferrari 458 GT3 #44 as the overall leaders. The 24H 65th edition is the most awaited race of the Championship, not only for the track’s beautiful landscape, but also because score will be assigned after the 6th, the 12th and the 24th hour “The atmosphere you experience at the Spa 24H is amazing. It’s the most important race as taking part at the Spa competition is like running a whole season”, says Rigon “We’re the Championship leaders, but there the standing will be reset to zero. It’s almost impossible to make a prediction, as the race is so demanding and many factors have to be taken into consideration. The Kessel Racing team is doing a great job, so this gives me great confidence. It’s up to the three of us not to make mistakes.”

On the 7004 m long track, the green light will switch on on Thursday at 9.45am with a free practice session which will be followed by pre-qualifying and qualifying sessions to be held at night (at 8.10pm) to assign the pole start for the race to start on Friday at 6.15pm “Qualifying is very important at Spa, as if you get a good position on the starting grid, you’ll avoid to be involved in a clash on the first laps.”

More than 70 cars will take part in the long race which will start on Saturday at 4.30pm. This is the third time Rigon takes part in the Belgian competition, after his great success in 2008 in the FIA GT World Championship and the unlucky experience in the past season, when the #71 car’s recovery was ruined by a technical issue “Winning the FIA GT Championship in 2008 at the wheel of a Ferrari racing car was an amazing experience, even because it was the first time I took part in that Championship. Unfortunately last year it didn’t go as we would have liked it to go, so we hope to take a revenge this week end”, ends Davide Rigon.