Blog - Latest News
You are here: Home / Championships / Rigon scored the second place in the FIA WEC’s last round in Bahrain a... 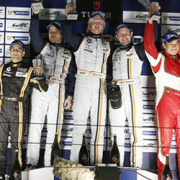 There could be no better end to the season for Davide Rigon, who finished second in the FIA WEC Championship’s last round at the Sakhir circuit in Bahrain. Thanks to the talented driver’s contribution at the wheel of the Ferrari 458 GTE, the 8Star Motorsport Team secured the Teams’ title and Ferrari secured the title in the constructors’ championship.

The Vicenza-born driver’s schedule was impressive: he took a podium finish in 3 events out of four. He took a win in Shanghai, finished second in Brazil and Bahrain and finished fourth in Fuji, scoring a total amount of 24 points.

As he did in the International GT Open Championship at the wheel of the Villorba Corse Team’s Ferrari 458, Davide showcased all his talent and professional skills helping Andrea Montermini win the overall title first and the 8Star Motorsport Team afterwards, proving himself to have the right stuff to compete in a world championship. “I’m very happy with this podium finish thanks to which the team and Ferrari won the title. I’m happy especially because it took only four points to take a win, two second places and a fourth place in a demanding championship such as the FIA WEC”, says Davide Rigon “I want to thank the team with whom I’ve always felt very comfortable. The Ferrari 458 is really a great car, as confirmed by the title won in the constructors’ championship and it’s fun to drive a GT2 car.”

For the Ferrari’s test driver, a very intense season ends. This was a season full of commitments, as he took part in the Blancpain Endurance Series Championship, in the International GT Open and in the FIA World Endurance Championship. He took also part in the rookie test at Silverstone at the wheel of the Ferrari F138. “It was an intense year, full of commitments both on and off track. Besides working hard at the Ferrari Simulator and at the wheel of the F138, I also had the opportunity to compete in a world championship behind the wheel of very competitive cars such as the Ferrari 458”, ends the Italian driver.

Hulkenberg – Force India…sometimes they get back
Scroll to top