Blog - Latest News
You are here: Home / Championships / Rigon to Shanghai for the FIA WEC thinking about the 2014 season 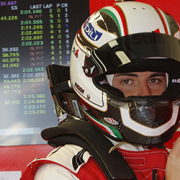 Davide’s adventure in the FIA WEC Championship goes on. The Italian driver will race alongside the 8Star Team, at the wheel of a Ferrari 458 GT2. After taking part in the races at Interlagos and Fuji, the talented driver, who is at the Scuderia Ferrari’s disposal, will fly to China this week end to take part in the 6 Hours of Shanghai, which is the world championship’s last but one event.

Davide will put all his talent to the 8Star Motorsport Team’s disposal, to help the Italian squad win the class title, trying to replicate the results achieved in the International GT Open Championship alongside Andrea Montermini and the Villorba Corse racing team. “Competing in a world championship is always so exciting; having the opportunity to drive a Ferrari is even more exciting. Unfortunately the event at Fuji was cancelled because of bad weather, so I hope in China everything will work out for the best. It will be the third event I’m taking part in and I hope to help the team win the title”, says Davide Rigon “Me and the staff get along so well, so this makes everything easier. It won’t be an easy week end, as I’m not familiar with the Chinese racetrack, but I’ll do my best, as usual, to try to reach our goal. It’s an important challenge and all participants are high-level drivers. Competing against them it’s a great opportunity to grow.”

Davide will make his return to China, the country where he won the Superleague Formula Championship in 2008 alongside the Beijing Guoan team: “It’s a pleasure for me to remember the 4 days I spent in Beijing. On that occasion a great party was arranged and Chinese people welcomed us in a warm way. They really made me feel at home, so it’s always a pleasure for me to go there. I hope to see many fans attending the event.”

Bhai Tech ready for the Barcelona final round