Blog - Latest News
You are here: Home / F1 / Road To Australia | MINARDI “In Melbourne in memory of Charlie”... 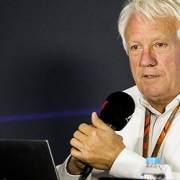 I am shocked and incredulous at the premature death of Charlie Whiting, a person who made Formula 1 history in recent years. My course through the world championship was tied to him as he became part of FIA in 1988 and Race Director in 1997. There was mutual respect and he was always close to my staff when we brought innovative solutions onto the track. I extend my condolences to his family.

Sadly, in these cases the show must go on and we are at the gates of the first grand prix of the new season. We finally get back to racing and the teams will be forced to put all (or nearly) their cards on the table to show the true values on the field.

I am still convinced that the reins of the race are once again in the hands of Mercedes and Ferrari despite an important compaction of performance towards the top also by second level teams where the drivers will have to make up the difference. The tests show how all the teams have worked very well and the expectations for Melbourne are for a weekend of competitiveness.

Last year we had a remarkable start by Ferrari that scored first and third places with Vettel and Raikonnen and Lewis Hamilton in second place. We are only in the first round of a very long season made up of a good twenty one races. It will be very important to keep both feet on the ground regardless of the final result.

It is the start of a season full of talking points.

ANTONIO GIOVINAZZI: Beginning with the return of one of our flag bearers on the starting grid, something that has been missing for too long. I hope he and Alfa Romeo will be able to fight it out for the places just behind Mercedes, Ferrari and Red Bull that will have the unknown factor of the Honda engine. Reliability will be an important factor for all the teams, as we saw in the second session of tests in Barcelona, even if for some years they have accustomed us to incredible results right from the start.

KUBICA’S RETURN: After eight years since his last grand prix Robert Kubica will make his second debut in F1. Sadly the premises are not rosy with the expectation of Williams in great difficulty. It is inexplicable what is happening to a team that has written some of the most memorable pages of this sport. I hope that the earthquake that it is experiencing –Paddy Lowe will leave the team – will be turned into an incentive to find the right road and to rise again since it does not deserve these results. We can sense they miss founder Sir Frank Williams who has been kept away from the team and the tracks by sickness

A POINT FOR THE FASTEST LAP: In the last few hours the allocation of an extra point for the fastest lap in the race was approved (if the driver places in the top ten) which will be valid for both the drivers’ and the constructors’ ladders. It seems banal, but in the course of the season these are twenty one points that can make the difference. An extra variation on the strategy front comes into play, especially in a very close season.

F1 | MINARDI “Qualifying will be close in Melbourne”

GP Australia | THE POINT by MINARDI “The difference Mercedes-Ferrari...
Scroll to top